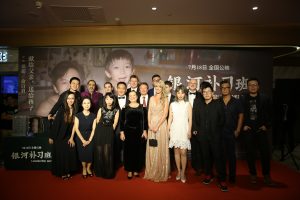 f you haven’t heard of Looking Up, then you’re not alone. This family drama about an astronaut reflecting on his father’s teachings premiered in Bejing on the 14th of July and on opening weekend made $9.22 million in China—practically tripling The Lion King‘s total.

Park Road’s Senior Re-Recording Mixer Mike Hedges flew to China to walk the red carpet and celebrate the release of the film with filmmakers and cast after mixing the feature at Park Road in May. Looking Up is co-directed by Yu Baimei and actor Deng Chao and the duo worked with the Wellington sound team headed up by Supervising Sound Editor Hayden Callow with Mike Hedges and Phil Heywood mixing the feature in Dolby Atmos.

Hedges says “This was a wonderful collaboration with Deng Chao, Yu Baimei and their team, the film is beautifully made and it’s a heart felt story that was a pleasure to work on. The box office results are incredible! We’re looking forward to being able to work with them again soon.”

This film focuses on a man who loses contact with earth traveling through space. The movie then becomes a series of flashbacks as he thinks back about everything his father taught him. 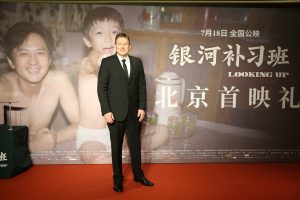